Acquiring and developing top-tier assets targeting precious and base metals.

The Property is located approximately 17 kilometres southeast of the community of Port Hardy and is comprised of two claims, together totaling 2,503 hectares. The Property is underlain by a generally southward-younging sequence of Upper Triassic to Jurassic rocks belonging to the Vancouver and Bonanza Groups. Major units include the Upper Triassic to Lower Jurassic Nahwitti River siltstone-greywacke, Lower to Middle Jurassic Holberg volcanic unit, and roughly coeval Mid Jurassic Island Intrusions. The Property was staked to target porphyry mineralization along trend from the neighbouring Island Copper Deposit, a past-producer with a long history of mining operations. The properties both share many of the same geological units that are known to host significant mineralization at Island Copper. There is also ongoing success in several geologically similar properties within the belt to the west of Island Copper, namely Hushamu, Red Dog and Pemberton Hills. 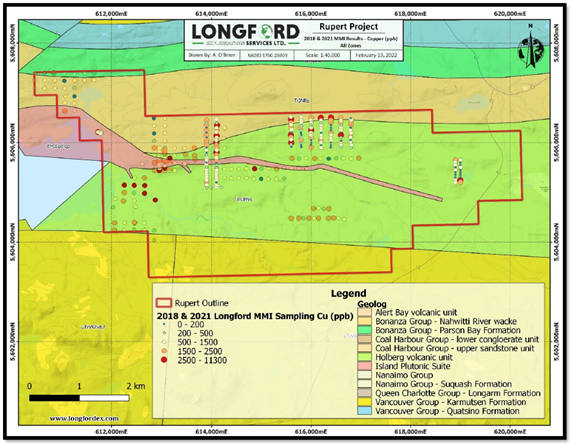 Technical information contained on this website has been reviewed and approved by Cameron Bartsch, P.Geo., a “Qualified Person”
as defined by National Instrument 43-101 – Standards of Disclosure for Mineral Projects.

Our Approach
Management Team
Board of Directors
Advisory Team